Credit to Portrait of a Wrestler

In Part 2 of my interview with Jimmy Havoc, the PROGRESS Champion talks about blood in professional wrestling, stare downs, promos and #BOOKHAVOC, but first…

What’s the story behind the pink chair?

END_OF_DOCUMENT_TOKEN_TO_BE_REPLACED

I conducted an interview with one of Britain’s top wrestlers, Jimmy Havoc, a man known for his ability to tell a story. Hear him speak about his favourite band, commitment to character and what Jim Smallman’s wife thinks of him.

Did you get up to much this past weekend?

I wrestled all weekend. Doug Williams on Friday, Kay Lee Ray on Saturday and then last night it was at the PROGRESS wrestling trainee show ENDVR against Pastor William Eaver.

Did you enjoy beating up a woman as promised?

HARI: Is there a particular reason you directed your wrestling shows to include younger audiences compared to say 18+ audiences?

SB: You can put my show on anywhere in the country, put up a couple of thousand posters and you will draw a crowd. With an adult audience you’re focusing on a very specific audience and you can’t take it all over the country whereas I run my shows in the majority of areas and I can promote it.

So it speaks to my business side, if you want to run as many shows as possible to as many people as possible.   With 18+, you can run a show every couple of months. With my show END_OF_DOCUMENT_TOKEN_TO_BE_REPLACED

I had the chance to share a phone conversation with Sanjay Bagga, the Managing Director of LDN wrestling based in London, England. Here’s what he had to say.

SB: I’ve only just got back from a show two and a half hours ago so I’m a bit rough.

HARI: Where was your show last night?

SB: North-Wales, so that’s a six hour drive by the time you’ve dropped people off back home and everything. Just got back home at 7.30, so a bit tired.

HARI: You were described as a well-dressed, passionate and confidant teenager, stirring up controversy on the UK Fan Forum, according to the book The Holy Grail. You are now Managing Director of LDN. Is it true you parents got you into wrestling from sitting you down in front of the television during the World of Sport days?

SB: That’s sort of true, my parents got me into World Of Sport but my generation grew up watching the WWF.

HARI: Who stood out to you at the time?

SB: The British Bulldog, I was a huge fan at the time, and Ric Flair too. The first wrestling show I ever watched live was SummerSlam 1992 in Wembley stadium, so you can imagine how that felt. END_OF_DOCUMENT_TOKEN_TO_BE_REPLACED

Let’s celebrate Spawn Sunday as I violate all of your WordPress feeds with yet another late night Scrawl For All! 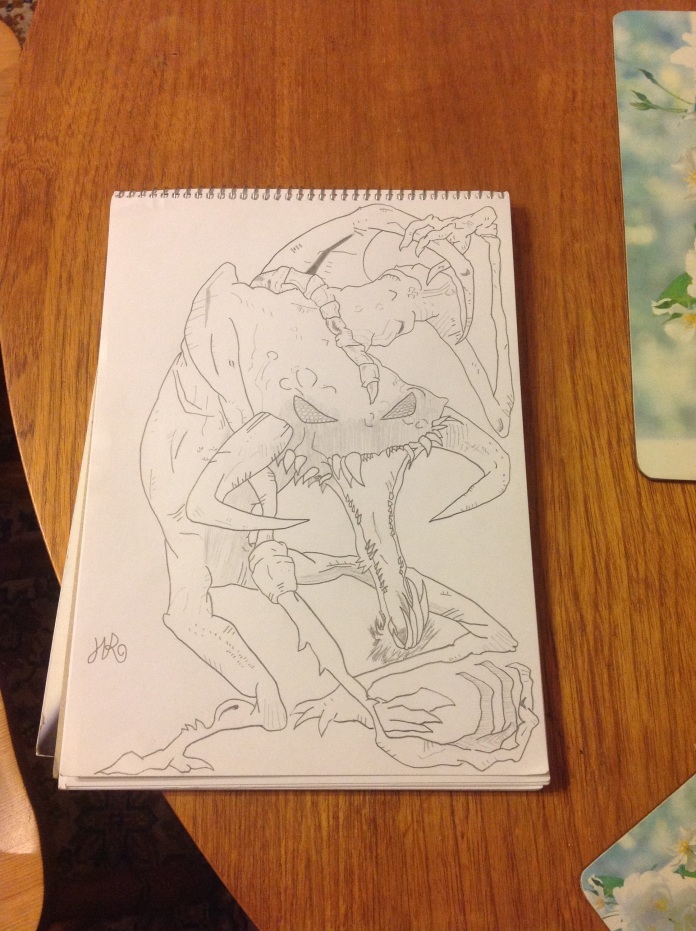 The Violator from Spawn

Here’s Part 2 of my conversation with Damian O’Connor. Not only was this a large conversation, but it also gets heavier. Enjoy the learning experience.

HARI: You wrestled Britain’s Bastard Dave Mastiff recently for ICW. A match where neither man looks like a gymnast or a swimmer, just two men about to batter one another. Did you enjoy standing on his chest? END_OF_DOCUMENT_TOKEN_TO_BE_REPLACED

I had the absolute pleasure of holding a two-hour conversation with Damian O’Connor, a mainstay at Scotland’s ICW and Coach at the SOURCE Wrestling School.

Here’s Part 1 of my ‘Unbelievable’ conversation with Big Damo, as he talks about Sting, Vader, Mark Henry and perfectionism in wrestling!